While PhotoTangler packs quite a bit of power for making collages and sophisticated graphic designs, it's still intended to be friendly and intuitive for "non-technical" users. One of the most common questions we receive relates to confusion over how "projects" work. In this article, we'll cover the difference between Projects and image Exports. The place where this is most relevant is when it comes to sharing your creations with other people or other graphics programs.


What is a PhotoTangler Project, and why would anyone need one? 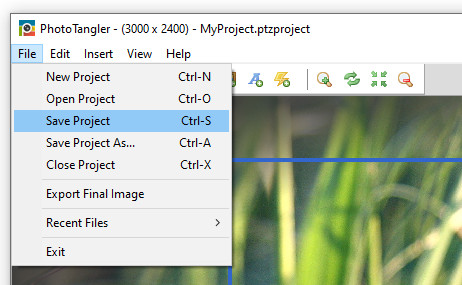 Please note that the PhotoTangler project file is ONLY intended to be opened for editing using PhotoTangler itself. If you share the "ptzproject" with someone else, they will not be able to view your collage using a standard image viewer or web browser. The only time you'd likely want to share the project is if you're collaborating on a collage project with someone else who also owns PhotoTangler. To share your final creation for general viewing, you'd instead want to export it to a standard image file first...

A "normal", standard image such as "JPG" or "PNG" format can not store the information that's required to open and edit the individual components of a PhotoTangler scene. That is, if we did not have a separate project file, you would not be able to go back later to edit your project after it was closed. However, when you're finished with your work in PhotoTangler, you can export a "JPG" or "PNG" to share with other people, or to open in other graphics programs. To do so, you simply go to the File menu -> Export Final Image. 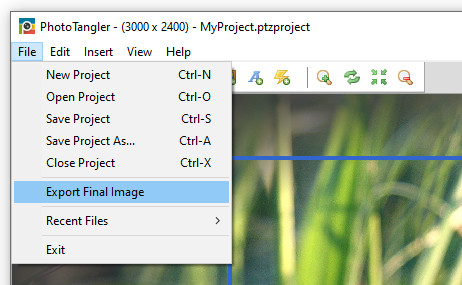 When the export dialog box pops up, you can enter the name of a file, such as "MyProject.jpg" or "MyProject.png", and it will save an image file in the format you choose. If you do not explicitly provide a file extension, such as ".jpg" or ".png", by default PhotoTangler will normally export a PNG file because they generally have higher image quality (at the cost of a larger file size.)

To summarize, the basic workflow for collage projects looks like this: Note: You are not strictly required to save a "ptzproject" at all, but again, if you don't, you will not be able to edit the scene again in the future! It's a good tip to save your project as soon as you create it, to help ensure your work won't be lost.

That's all there is to it! Hopefully you're now crystal clear on the difference between projects and exports in PhotoTangler!